The 1996 Medal and Awards presentation ceremony was on 10 December 1996 at a luncheon at the Sheraton on the Park hotel in Sydney. Commission President, Sir Ronald Wilson gave the Human Rights Day address and Indira Naidoo was the MC. 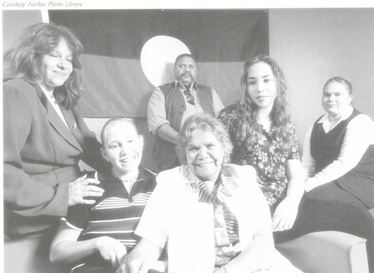 The late Robert Riley had a life-long commitment to advancing Indigenous issues in Australia. Soon after his birth, Mr Riley was removed from his family and placed in state care at Sister Kate's in Perth. He was almost ten years old before he knew his mother was alive and was only reunited with his family when he was 12. His experience of forced removal would later be reflected in the publication he produced through the Aboriginal Legal Service, Telling Our Story, the most comprehensive description of the experience of Aboriginal people removed from their families undertaken in Western Australia.

He was well known for drawing public attention to the issue of Indigenous land rights during his time as Chairperson of the National Aboriginal Council, and he was also part of the negotiating team on the Native Title Act. On the national political stage, Mr Riley was senior advisor to the Minister for Aboriginal Affairs, as well as Head of the Aboriginal Issues Unit of the Royal Commission into Aboriginal Deaths in Custody. However, he also devoted himself to improving the conditions of the Noongar community through helping to establish the Perth Aboriginal Medical Service, the Aboriginal Child Care Agency, the Centre for Aboriginal Studies at Curtin University and the Western Australia Aboriginal Media Association.

Rebecca Peters jointly received the 1996 Human Rights Medal for her contribution to researching, educating and lobbying for gun law reforms in Australia. She has provided advice to the Federal and many State governments in the drafting and review of new legislation. In the wake of the Port Arthur tragedy, Ms Peters, National Convenor of the Coalition for Gun Control, campaigned vigorously for gun law reform, and since that time, new legislation has been passed in all Australian states and the Australian Capital Territory, and new laws have been drafted for debate in the Northern Territory.

Prior to her work with the Coalition, Ms Peters was active on a broad range of social issues, including the Women's Electoral Lobby, the Reclaim the Night Collective, the Council for Civil Liberties, and researcher for the first secretary of the reconvened National Inquiry on the Human Rights of People with a Mental Illness. "I believe it is of the utmost importance for people to be full participants in society without the fear of gun violence. For many Australians the Port Arthur tragedy challenged our assumptions that public spaces in broad daylight are safe. The new gun laws will help us to regain that confidence and prevent it being shattered again" she said.