The 2004 Medal and Awards presentation ceremony was held on 10 December 2004 at a luncheon at the Sheraton on the Park hotel in Sydney. The Human Rights Day address was delivered by Commission President, the Hon. John von Doussa QC and Julie McCrossin was the MC. 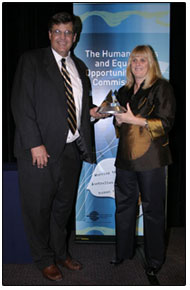 Deborah Kilroy is the founder and Director of Sisters Inside, a thriving community organisation providing services to women in and from prison throughout Queensland. After emerging from prison herself in 1992, Ms Kilroy established Sisters Inside for women who were marginalised, stigmatised or imprisoned. The management team is made up mainly of women who are in or have been in prison - augmented by a few former politicians, lawyers, academics and other professionals. About 25% of the staff and steering committee are Indigenous women.

Its programs include a personal support and women's transition program, kids of mums in gaol project and youth crime prevention program. The organisation also produces journals and newsletters and takes part in national and international advocacy.

The judges praised Ms Kilroy for her strong leadership and advocacy on behalf of women and girls in prison. Under Ms Kilroy's leadership, Sisters Inside is addressing the rising number of Indigenous women in prison and the criminalisation and imprisonment of women with mental illness and physical disabilities.

Dick Estens is the founder of the Aboriginal Employment Strategy, a model for Indigenous employment which helped turn around the future of NSW country town Moree. The strategy which was set up in Moree in 1997, now places 450 Aboriginal people into employment every year and has expanded into Tamworth and Dubbo.

All staff are Aboriginal. They visit businesses to seek a commitment to work with the Employment Strategy not only to provide employment to Aboriginal people, but to build partnerships and acts as mentors to ensure success for the employer and the employees.

The success of the Aboriginal Employment Strategy relies on building self-esteem and pride, and also peer pressure to succeed, from within the Aboriginal community. The judges said Dick Estens' success in Moree was a great example of what can be done and how it can be used as a blueprint for other Indigenous communities. A racial hotspot 10 years ago, Moree now displays great self-esteem and initiative. Aboriginal people are delivering for their community and in charge of their own destiny. Similar strategies will be rolled out into six regional sites by the end of 2004.

law award - sponsored by the law council of australia

Melbourne barrister Julian Burnside QC has been extensively and consistently involved in pro-bono legal work for asylum seekers (including the well-known Tampa case) - not least through Spare Lawyers for Refugees, which he established in order to encourage other lawyers (now over 250 nationwide) to volunteer their time and professional expertise to help refugees and asylum seekers. He and his wife also established Spare Rooms for Refugees to provide material support and accommodation for refugees in the general community.

He teaches and trains young lawyers internationally and is outspoken about human rights and freedoms in the legal profession, in the media and in the community. In 2004, with Malcolm Fraser, Robert Manne and Young Australian of the Year Hugh Evans, he started The Justice Project - a group that supports basic human rights for all in the community and provides humanitarian assistance in many ways.

The judges credited PEN (the international association of Poets, Playwrights, Essayists and Novelists) with an effective campaign of raising asylum seeker issues within the Australian conscience and said it was able to bring national and international pressure to bear in seeking the release of asylum seekers in detention.

PEN Sydney created a Writers in Detention Committee in 2001 and, through members Tom Keneally and Rosie Scott, organised the International PEN's Day of the Imprisoned Writers which focused on the plight of asylum seekers in detention in Australia. The work of writers recently released from detention was featured at the Sydney and Melbourne Writers Festivals. PEN also editedAnother Country - an anthology of writing from asylum seekers.

Merinda Epstein has been actively involved in mental health politics for 15 years. She is recognised as one of Australia's leading mental health consumer advocates and internationally recognised for her contribution to mental health service development. Ms Epstein was recognised by the judges for her determination, bravery, moral integrity and insight in ensuring that the rights of people with psychiatric disabilities are defended.

The judges particularly admired the fact that Merinda, as quoted by one of her nominators, "can sniff out injustice much as a beagle find contraband at the airport" and the fact that "Merinda is notoriously bad with money, as she gives away to those in needs and forgets to budget to keep any money for herself".

John Murray, coordinator of the Positive Justice Centre (a volunteer community organisation) has campaigned tirelessly to overcome discrimination against and social exclusion of people who were in the care of the State or Church as children. He has authored and co-authored many books and made many important submissions to government committees on the subject.

Mr Murray was recognised by the judges for the outstanding role he has played in promoting human rights for young people in institutionalised care. His groundbreaking findings in the 2001 Inmate Health Survey found that almost 40% of prisoners had been in the care of the State/Church as children, which led to the first comprehensive assessment of the State ward/care leavers over-representation in the criminal justice system.

John has lobbied and argued that identification of young people previously in State/Church care permits rehabilitation and effective crime prevention programs and enables preventative models to be undertaken.

Refuge Australia, by Klaus Neumann documents the history of Australia's response to refugees and provides fresh insights that illuminate the social and political forces that have shaped Australia's refugee policy.

The judges described Refuge Australia as a highly readable account of Australia's long history of debate about refugees and asylum seekers. Drawing together thousands of personal stories of refugees seeking refuge in Australia between 1930 and 1970 and original government documents, the book describes Australia's ambivalent attitude to refugees in a cool, clear tone.

"In so doing, Klaus Neumann doesn't prejudge the issues. Rather, he allows readers to arrive at their own conclusions. Refuge Australia does, however, leave the reader with a sense of optimism and the idea that change is possible.

In the midst of widespread community debate about Australia's current treatment of refugees and asylum seekers, Refuge Australia provides an important historical context in which to examine these issues. It's also a great read."

The Road to Tooleybuc focussed on a seemingly unlikely friendship between Ian Skiller, a farmer from the town of Tooleybuc, population 250, and a young Afghan refugee, Dr Abdul Nasiry, a medical graduate from Kabul University.

The judges described The Road to Tooleybuc as an open and honest story about the relationships that develop between Afghan TPV holders and members of small rural communities. They said the image of a group of Afghan refugees in traditional garb eating their food next to the Murray River farmer and his mother does more to promote what these human rights awards are about than any words.

The story showed that those who assume people from outback Australia are intolerant or inflexible are very wrong. It moved beyond the negative images and portrayals of refugees - here are Afghan people on TPVs integrating into the community - and showed how 'normal' people with no idea of refugee issues could become activists.

Beyond the Bars: Out and Blak is a unique radio program that presented the stories, songs, messages and concerns of Indigenous prisoners - a six hour broadcast from within the Port Phillip prison in Laverton and the Dame Phyllis Frost Centre in Deer Park, Victoria.

The judges said it was "simply a great program and a standout winner" and an excellent example of a community telling its own story. They said the program demonstrated that great radio does not have to rely on a big budget - the key ingredient is talking to people who have something honest and important to say.

Stolen Wages Payback Shame is a special report on "stolen" wages and payments owed to Aborigines from the turn of the century in NSW. The series documents the story of the wages and savings, pensions and other payments to Aborigines withheld by New South Wales Governments for 70 years until 1969. It detailed the "unwritten policies" pursued by successive Governments of denying liability, misleading Aboriginal people about the fate of the funds and resisting efforts by the rightful owners of the money from claiming it back.

The judges were impressed by the effort undertaken by the small newspaper and the direct impact it had in prompting action by the NSW Government, other State Governments and Indigenous organisations. They said the power of the piece came not just from the revelations of past injustices, but also the illustration that Indigenous people's lives are still being frustrated by government failure.