The Human Rights Medal is awarded to an individual who has made an outstanding contribution to the advancement of human rights in Australia. The medal has a rich history of prestigious winners. 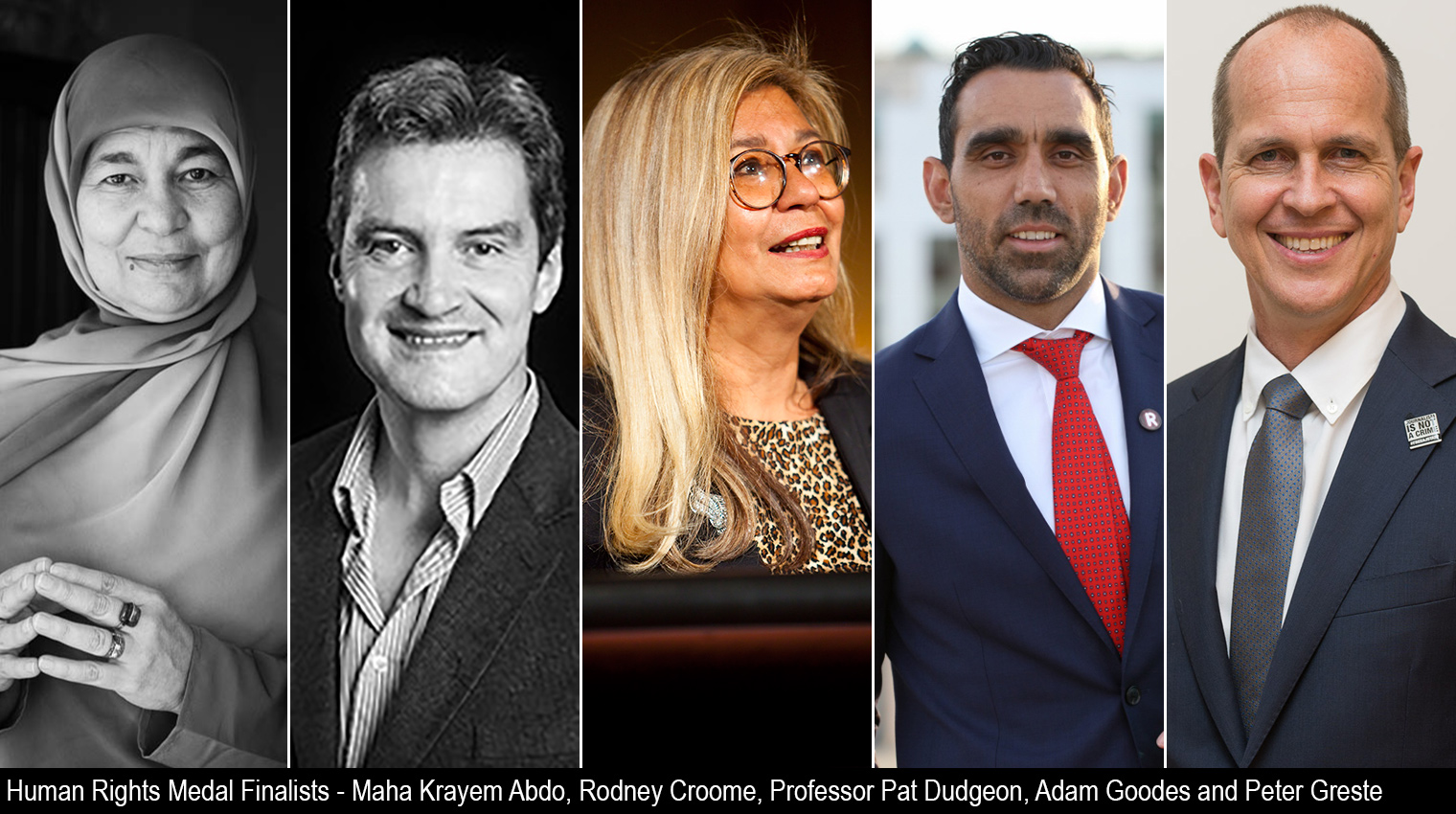 Peter Greste spent 400 days in an Egyptian jail after being arrested in Cairo and charged for terrorism-related offences in 2013/14. The trial was widely publicized and also criticized around the world for the lack of evidence and the political issues that surrounded the case. Following his release, Peter used this case as a platform to advocate for freedom of speech and a free media. He has made numerous public appearances and spoken about the importance of a free and unencumbered media in properly functioning democracy.

For over 25 years, Maha Krayem Abdo has helped empower women and youth from culturally and linguistically diverse backgrounds. Under her leadership, the Muslim Women's Association (MWA) has become the peak representative body of Muslim women in Australia, and the specialist in assisting individuals escaping domestic or family violence. Maha's outstanding achievements and service in regards to social inclusion, human rights, and equality were recognised by the nation in 2008 when she was awarded the honourable Medal of the Order of Australia. She is also the 2014 NSW Human Rights Ambassador.

Rodney has devoted his life to the rights of lesbians, gays, bisexual and trans* (LGBT) people. He led the successful campaign to decriminalise homosexuality in Tasmania, and his lobbying and advocacy skills were crucial to the passage of Tasmania’s anti-discrimination law. He has played an important role in the development of Tasmania’s LGBTI policies and programs in education, health and policing. Rodney is the national director of Australian Marriage Equality and is an active contributor to and leader of the campaign for marriage equality.

Professor Pat Dudgeon has made a significant contribution to promoting and enhancing the mental health and human rights of Indigenous Australians. She is from the Bardi people of the Kimberley area in Western Australia and was the first Aboriginal psychologist to graduate in Australia. She has conducted exemplary research aimed at improving outcomes for Indigenous Australians and is currently one of the first Mental Health Commissioners in Australia. Professor Dudgeon is the project leader of the National Empowerment Project, an Indigenous suicide prevention project working with 11 Aboriginal communities across the country.

Adam Goodes is well-known for his outstanding sporting performances and for his advocacy in the fight against racism. Adam was named the 2014 Australian of the Year in recognition for his off-field performances. In 2004 he joined the National Indigenous Council, and in 2009, Adam set up the Goodes-O'Loughlin Foundation with fellow indigenous teammate Michael O'Loughlin to create a brighter future for disadvantaged Indigenous children. Adam is a proud Indigenous man with the courage to speak out and actively strive towards building a better place for all Australians.

The Young People’s Human Rights Medal is awarded to an individual who is under the age of 25 years (on 30 September 2015) and who has made an outstanding contribution to advancing human rights in Australia. 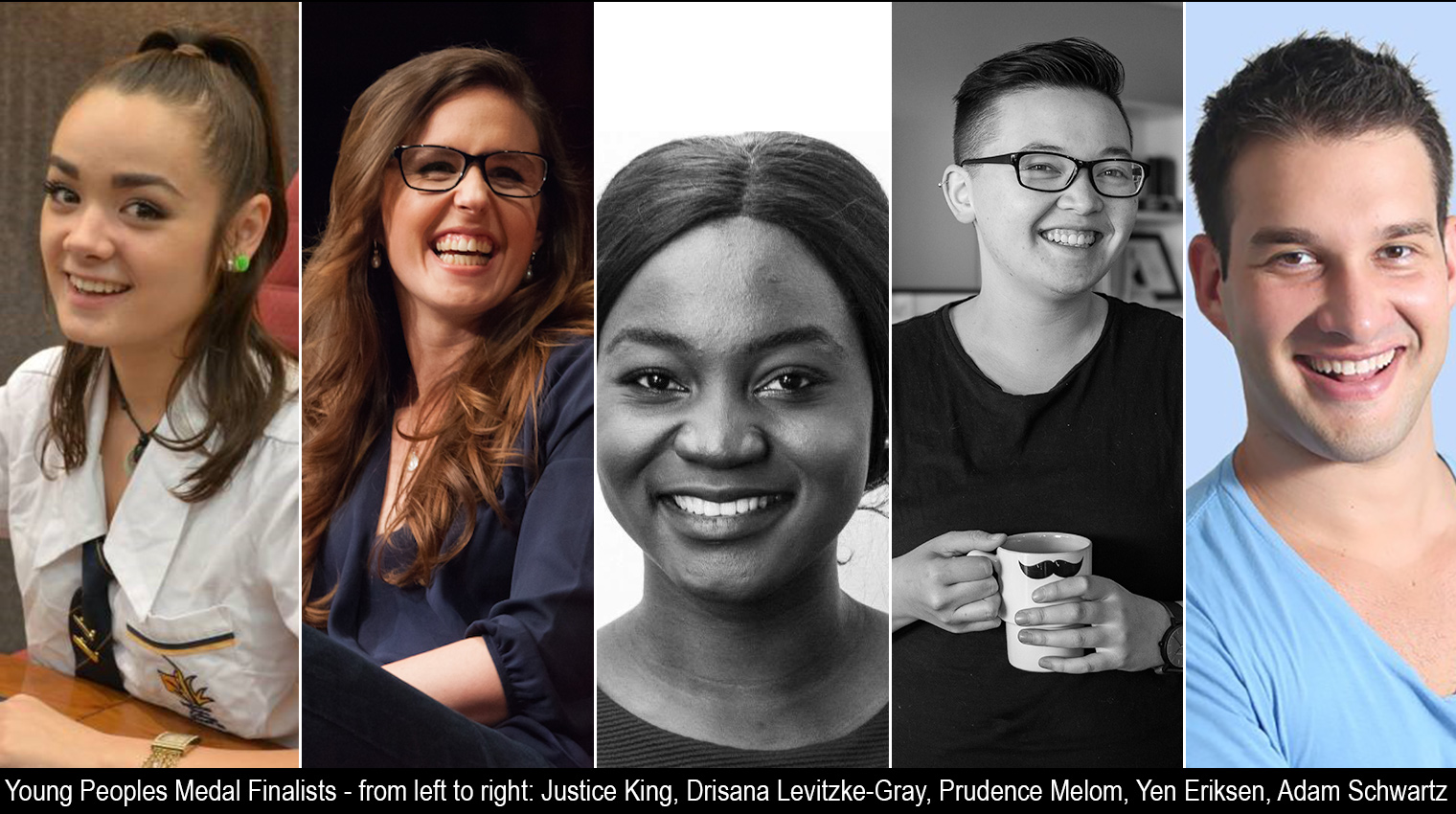 Yen (23) is an exceptional campaigner on LGBTIQ issues. She has fought for safety and respect for LGBTIQ students and influenced change through her role on the ACT Government Ministerial Council for LGBTIQ. She has fostered inclusion for vulnerable members of the LGBTIQ community through founding a radio show for LGBTIQ women and a gender inclusive roller derby league.

Justice King (17) is a young Aboriginal Australian woman from Mt Isa. Justice has made an outstanding contribution to human rights by speaking out about youth mental health issues. Justice has written about her experiences with depression and produced the innovative “Raise your Cards” campaign that encourages the sharing of stories by survivors of mental illness.

Drisana (22) is a committed advocate for the rights of the Deaf community. She has campaigned for the rights of deaf children and their families to access Auslan. Drisana has worked hard to change community attitudes and to change the sense of isolation felt by many Deaf children. Drisana has been recognised as the 2015 Young Australian of the Year.

Prudence (20) is a hardworking advocate focused on racial equality. She has helped to create E-Raced, a series of workshops held in small towns that are about erasing racism through storytelling. Prudence has used the story of the struggle of her family while escaping conflict in her home country of Chad to promote harmony and respect in regional Australia.

Adam (24) has been selected to recognise his work destigmatising depression and providing counsel to young people and their families.  He has done this through bravely speaking out about his experiences with depression in his book, ‘Mum, I Wish I Were Dead’. At the age of 10, Adam began periods of school refusal, endless trials with unsuccessful drug regimes and contemplation of suicide. 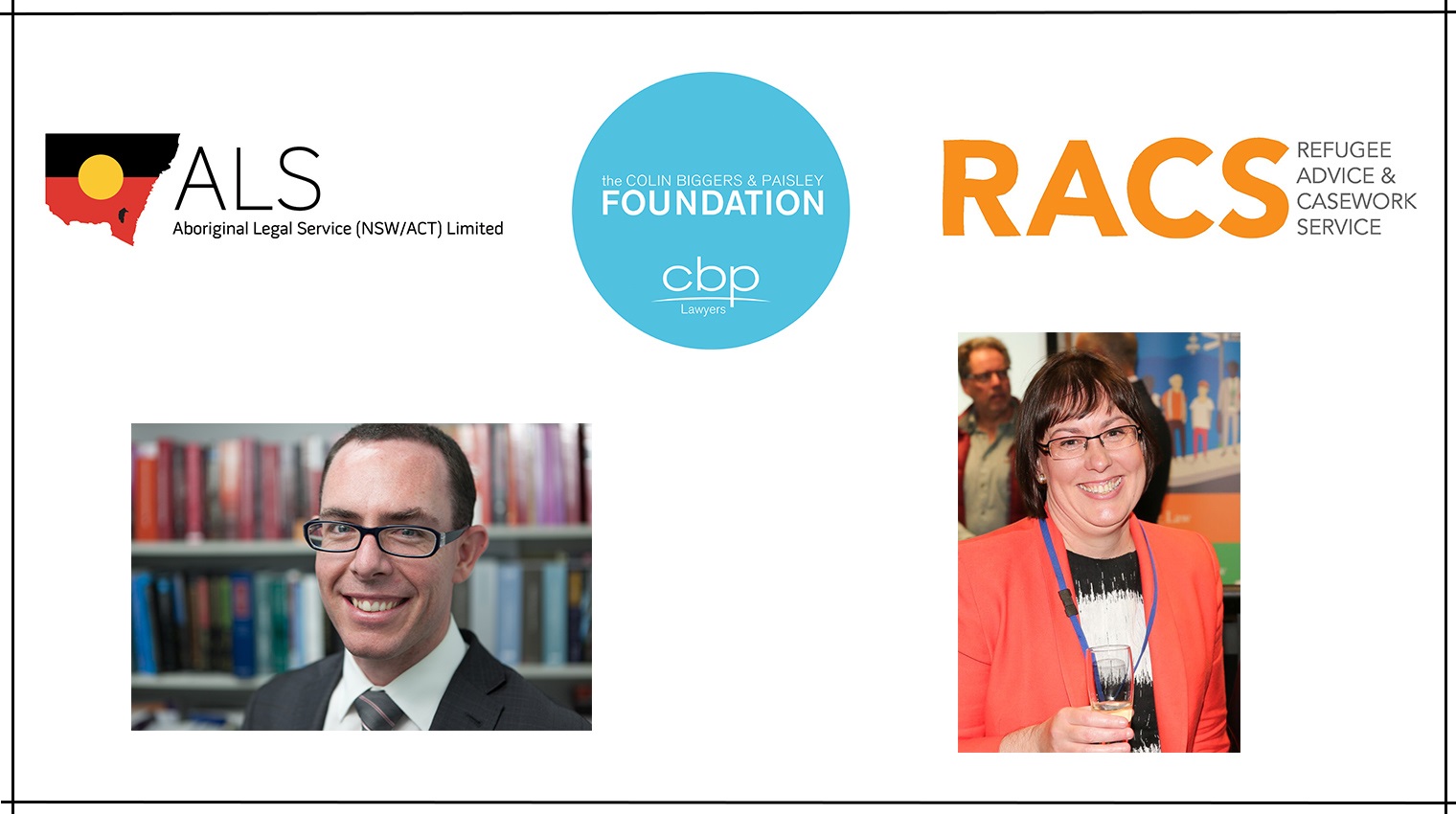 The Law Award is awarded to an individual or an organisation with a track record in promoting and advancing human rights in Australia through the practice of law.

Genevieve has dedicated her career to improving access to justice and is a powerful advocate for systemic change. Genevieve is currently the coordinator and principal solicitor at Canberra Community Law.

Custody Notification Service is a 24 hour legal advice and RU OK phone line for Aboriginal people taken into police custody. The service has successfully prevented Aboriginal deaths in custody in NSW and the ACT.

Luke is the founder and managing partner of Salvos Legal and Salvos Legal Humanitarian. The social enterprise model is self-sustaining and allows for free legal advice to be offered, independent of government funding and donations.

RACS is one of Australia’s leading refugee legal centres providing free, specialist legal advice to asylum seekers and refugees. RACS continues to provide a breadth of legal and case management services, while advocating for systemic reform.

The Business Award is awarded to a corporation that has made a practical and/or policy commitment to the promotion and advancement of human rights in the Australian community. 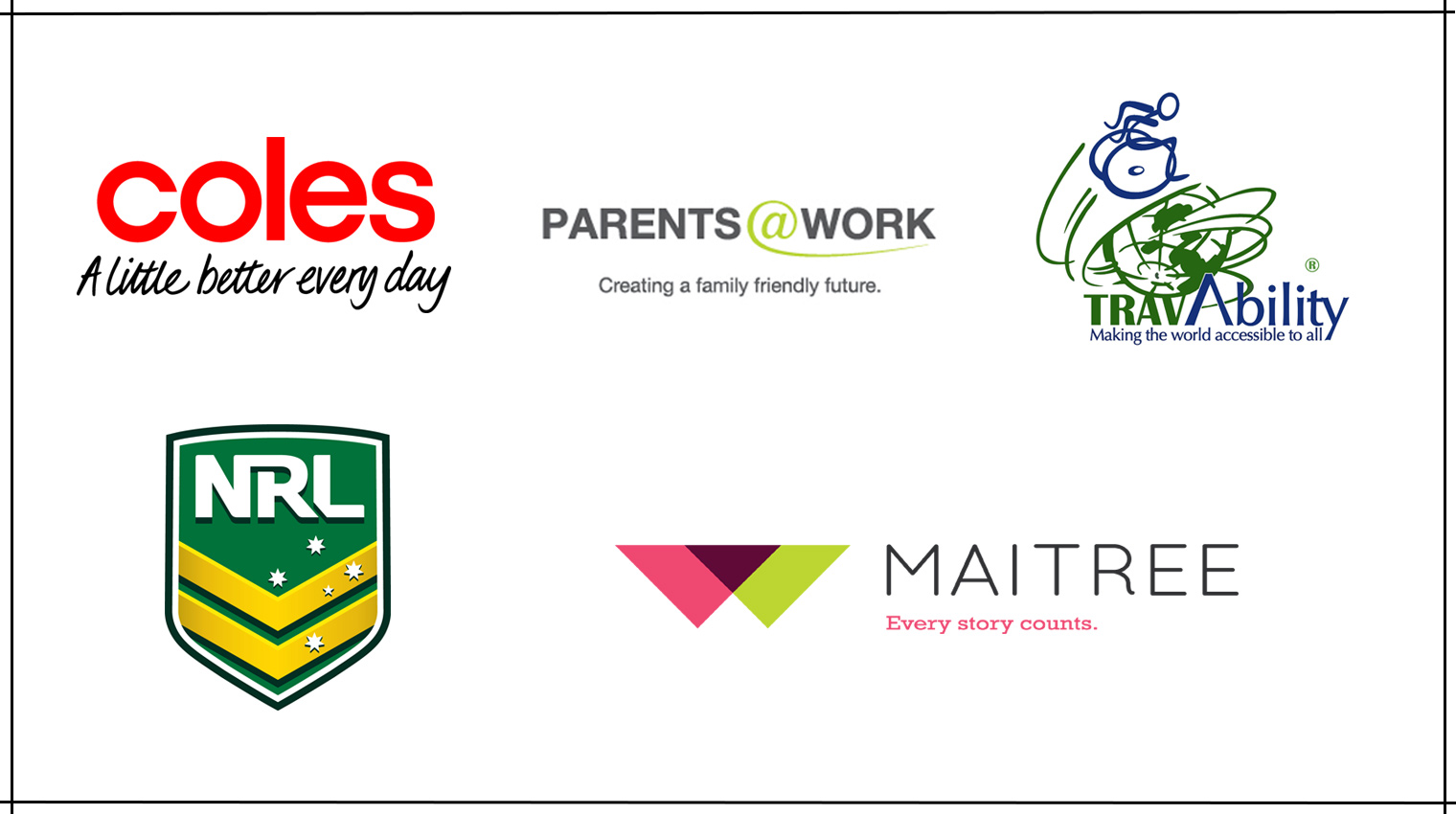 Maitree House Productions uses multimedia communication tools to showcase the work that is being done around the country for social good. It brings social justice to the fore by giving voice to diverse groups of Australians, including young people, women, Indigenous people and older Australians. The company’s productions help advance our understanding of human rights, their impact and implementation.

Australian Rugby League Commission has built on its support for reconciliation by producing its third Reconciliation Action Plan (RAP) 2014-17. This RAP embeds Aboriginal and Torres Strait Islander people and issues in all aspects of the game – from players, coaches and volunteers to their elite pathways program that will see ATSI players increase from the current 11% to an expected 15%.

Racism. It Stops With Me Award

The ‘Racism. It Stops With Me’ Award recognises the contribution of an organisation to reducing and preventing racism in Australia. Organisations can include community groups or businesses and they can be recognised for a range of anti-racism work including education and prevention. 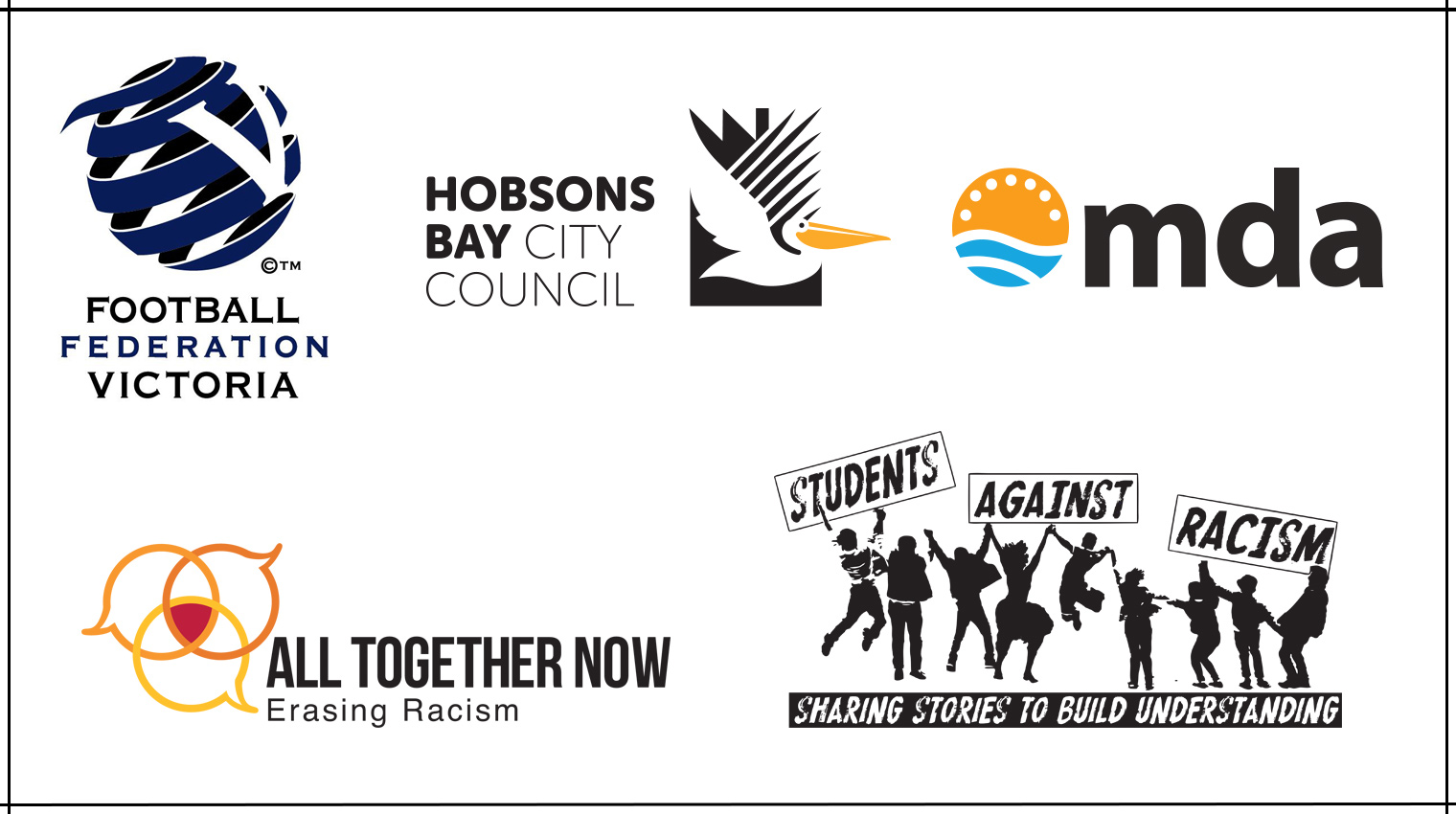 What started as a grassroots movement in 2008, Students Against Racism has grown into a productive and effective education and advocacy group involving more than 220 young presenters and 10,000 participants. The Students Against Racism workshop has been included in University and TAFE courses in Tasmania, and has recently been piloted as part of the Tasmanian Police Recruit Training Course.

A leader in tackling racism in sport, Football Federation Victoria’s ‘Don’t Stand By, Stand Up’ campaign addresses racism at multiple levels of the sporting code. The campaign includes a ‘pledge program’ involving 52 clubs, a ‘Respect and Responsibility’ course, appointment of ambassadors, a video campaign, and tools and resources to help clubs manage and respond to racism.

An active participant in the Racism. It Stops With Me campaign, the Multicultural Development Association has been spreading the anti-racism message in a number of diverse communities. The Queensland based organisation strives to create welcoming, inclusive and socially cohesive communities. It has undertaken an extraordinary number of promotional events and activities over the past two years, with impressive reach and impact.

National charity All Together Now has undertaken some strong anti-racism programs in recent years, underpinned by a robust evidence base. Projects include the award-winning One Parramatta initiative and the Community Action to Prevent Extremism programs. Its innovative Everyday Racism mobile phone app achieved 6,000 downloads in a matter of weeks, demonstrating the reach and impact of All Together Now programs.

Hobsons Bay City Council has implemented a strong and coordinated approach to combatting racism and promoting cultural diversity, both within the council and in the local community. Anti-racism activities included training sessions for council staff, a diversity and anti-discrimination audit resulting in development of an action plan, and the successful ‘Behind This Smile’ community art project.

The Tony Fitzgerald Memorial Community Award is awarded to a person or not-for-profit community-based organisation with a track record in promoting and advancing human rights in the Australian community on a not-for-profit basis. 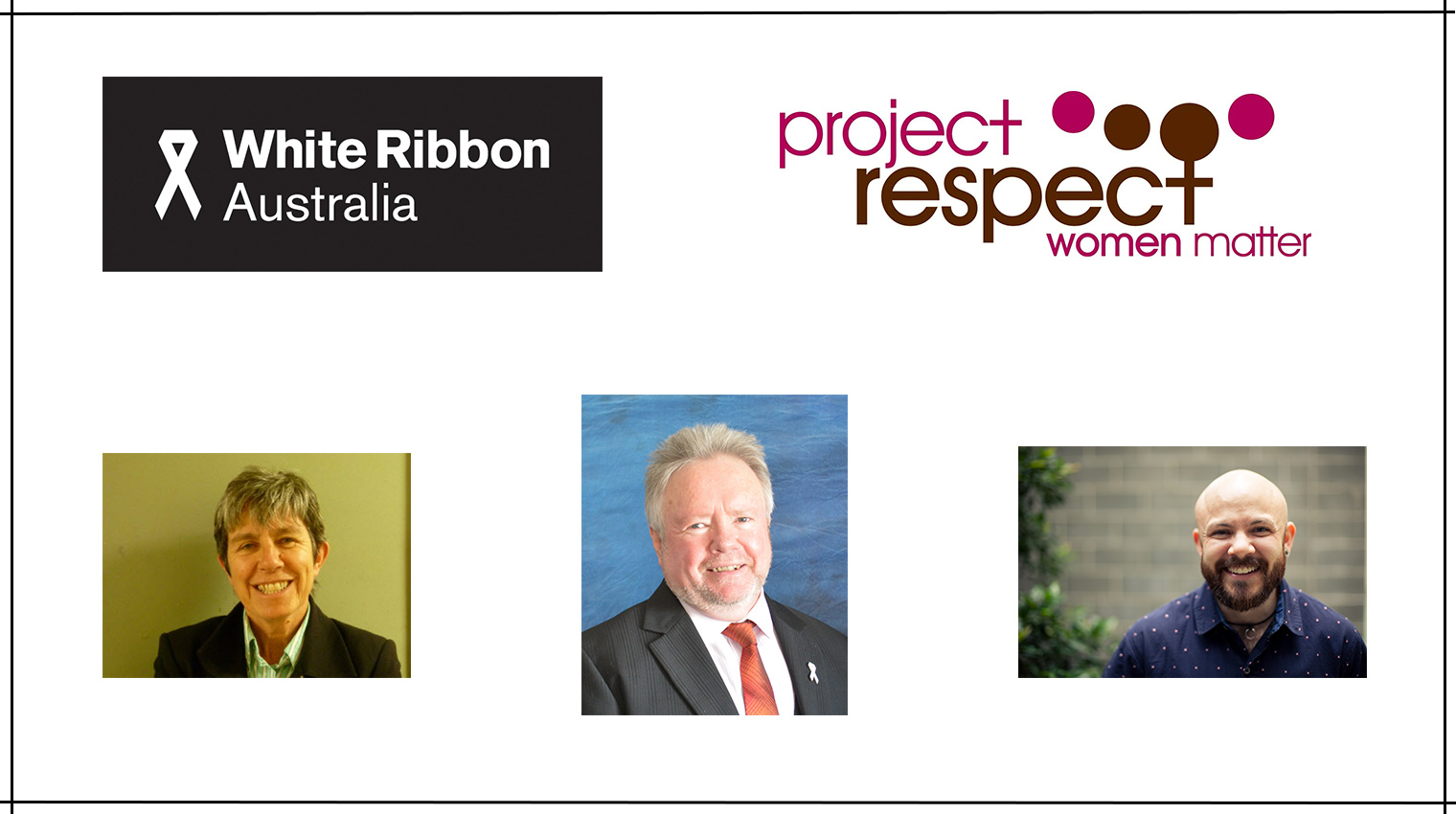 Ludo McFerran has a long history of working for the rights of women and children, specifically in conducting research and identifying innovative solutions to family violence.

Ludo has had a key role in designing approaches to family violence that focus on housing stability and avoiding homelessness. Her advocacy in recent years has focused on family violence leave being incorporated into workplace agreements.

He has shared his journey in transitioning from female to male, and also challenged Western Australian laws with the result that transgender people are more readily able to access services without discrimination.

Tony is a community advocate in Victoria who has worked tirelessly for the rights of people with a disability and other vulnerable groups over many years.

In his current role as CEO of Outlook, Tony is putting into practice the Convention on the Rights of Persons with Disabilities through promoting independence and genuine life choices for people with a disability.

Project Respect supports women in the sex industry, including women who are trafficked to Australia.

They represent the experiences of women who are often marginalised and in extreme situations of violence and abuse.   Project Respect works to overcome discrimination and exploitation of women in the sex industry through education and awareness of the broader community.

The Media Award is awarded for any published work in the media which has been broadcast in Australia. This can include television and radio programs, documentaries, and print and online articles. 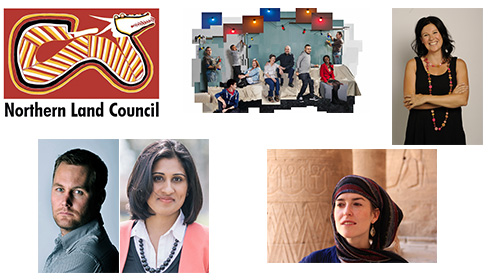 Extraordinarily raw and personal, The Storm by Kirsti Melville is the personal reflections of her former partner Erik, a survivor of child sexual abuse.

Erik talks candidly about his lifelong battle to beat the demons of his traumatic experience. During this powerful radio documentary, Erik revisits his disturbing past and at times, exhibits confusion from reliving the trauma.

This publication plays a critical role in putting issues facing Aboriginal people on the agenda, whether it be land rights and native title or inequality and injustice.

The respectful approach to patients and their treatment produced a raw, sometimes funny and at times uncomfortable television series.

Ben Doherty and Sarah Malik
The Extraordinary Detention of Sayed Abdellatif, The Guardian

Ben Doherty and Sarah Malik demonstrate their commitment to human rights in this well researched series about the indefinite detention of Sayed Abdellatif and his family.

All seven remain locked up because there’s a cloud over Sayed’s past. This family’s case is as complicated as it is disturbing and the writers illustrate the need for justice.

Jess Hill
Home Truths: The costs and causes of domestic violence, The Monthly

Home Truths: The costs and causes of domestic violence is the result of months of research and a fierce determination to understand how family violence arises.

Jess Hill documents individual stories of brutality, isolation, fear and dominance, contextualised with quality research and expert opinions. At the heart of this issue, is gender inequality. This is a must read for men and women.