Commission announces shortlist for the Racism. It Stops With Me award 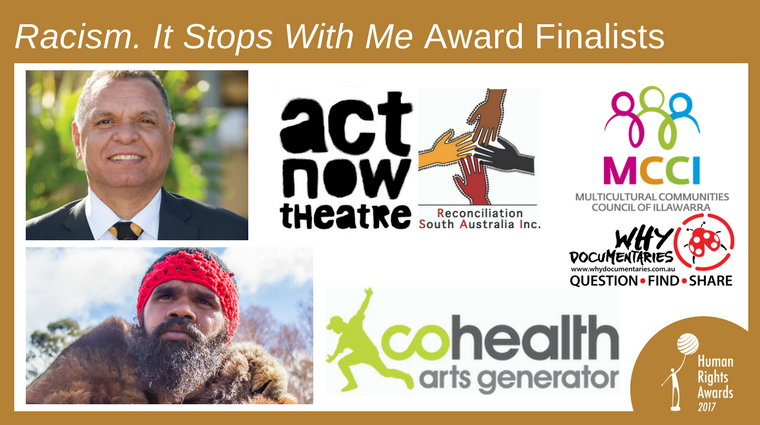 Judges for the 2017 Human Rights Awards have selected five finalists for the Racism. It Stops With Me award.

Clinton Pryor, who walked from Perth to Canberra to meet with the Prime Minister, is on the shortlist, as is Sean Gordon, who is chief executive of the Darkinjung Local Aboriginal Land Council on the NSW Central Coast.

Clinton Pryor was motivated to walk across the country following the Government’s announcement that it would close many remote Aboriginal communities in Western Australia. The town of Mulan, where Mr Pryor grew up, was one of the communities facing closure.

Mr Pryor’s trans-continental walk created significant public interest in issues facing remote and regional communities and culminated in meetings with the Prime Minister and the Leader of the Opposition.

Sean Gordon has been recognised for his work empowering Aboriginal communities on the NSW Central Coast and throughout Australia.

As chair of the National Empowered Communities Leadership Group, Mr Gordon has helped link Indigenous-led projects around Australia. He has also been active in the movement for constitutional recognition, and was a regional representative to the Referendum Council held at Uluru that resulted in the Statement from the Heart.

Mr Gordon has made the case for constitutional recognition in his recent essay ‘Claiming the Uncommon Ground for Recognition’.

The other finalists for the Racism. It Stops With Me award are the Cohealth Arts Generator Sisters and Brothers Program, Reconciliation SA and ActNow Theatre, and the Multicultural Communities Council of Illawarra and Why Documentaries.

The Cohealth Arts Generator Sisters and Brothers Program is tackling racism in Victoria with a school leadership and vocational program that encourages bystanders to take action when they witness racism, and that builds confidence and resilience.

This year, 265 primary school students learnt about empathy towards people who experience discrimination. The Cohealth Arts Generator also supported six of the program facilitators to move into full time roles with Cohealth and with local government.

Reconciliation South Australia and ActNow Theatre, since 2014, have developed and delivered interactive theatre programs for school students designed to help them to develop strategies to tackle racism.

Multicultural Communities Council of Illawarra and Why Documentaries have been recognised for producing of a series of documentaries that bring to life authentic stories of friendships between people of different backgrounds living in the Illawarra region. These stories celebrate diversity and multiculturalism, as expressed through friendship and mateship.

In the first six months of the project, the documentary videos achieved 220,000 views across a range of platforms.

The 2017 Racism. It Stops With Me award is proudly sponsored by the Delegation of the European Union to Australia.

The Australian Human Rights Commission will announce the winner of this award at its annual Human Rights Awards at the Westin Hotel in Sydney on 8 December 2017.